To have your Burlington arts or cultural event listed in this calendar, please submit your information here by the 15th of each month for events that begin or take place in the following month: 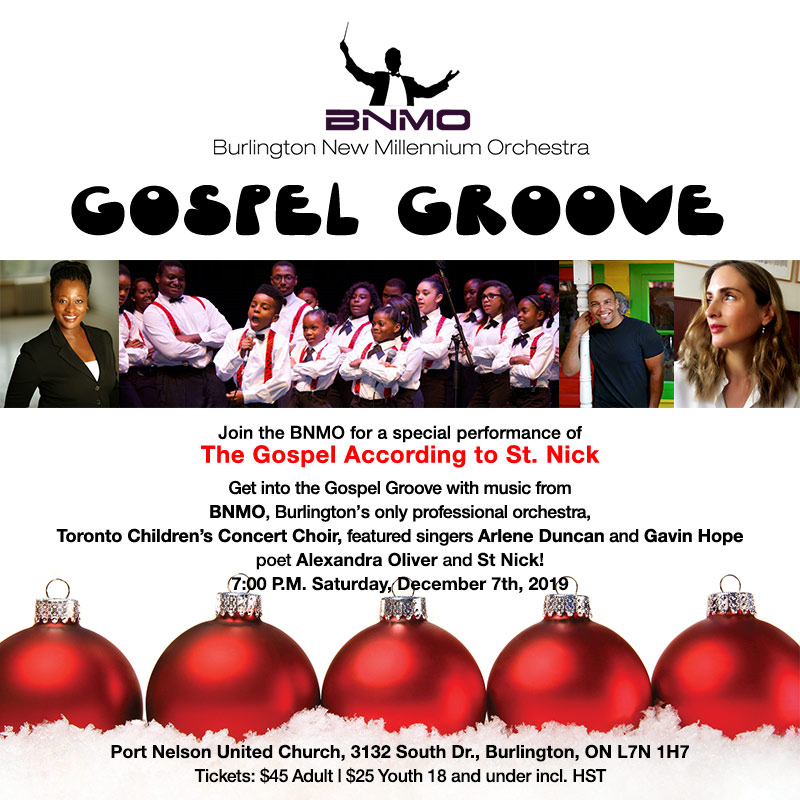 Join the BNMO for a special performance of

The Gospel According to St. Nick

Get into the Gospel Groove with music from:

Burlington New Millennium Orchestra is Burlington’s only professional orchestra. The BNMO is comprised of highly respected musicians and talented soloists whose performances are comparable to the Canadian Opera Company, Metropolitan Opera and Boston Pops with inspiration from the Trans-Siberian Orchestra.

Specializing in broad-based non-classical performances, BNMO is genre-crossing. Our repertoire features Pops, Broadway, Jazz, Rock, and World Music, and many of the scintillating arrangements are penned by Conductor and Artistic Director Charles Cozens.

Charles Cozens is the driving force of the BNMO. A highly acclaimed arranger, composer and orchestrator, Maestro Cozens is best known for compelling symphony shows, featuring his arrangements for full orchestra, performed by artists that include Sir Elton John, Randy Bachman, The Nylons, Mark Masri and more.

Toronto Children’s Concert Choir & Performing Arts Company (TC3) is more than a choir. Bringing together young people ages 7 to 18 from across the Greater Toronto area, TC3’s mission is to promote, develop and encourage youth through inspirational song, dance and Afro-Caribbean drumming. The focus is always on establishing excellence, holistic development and first-rate performance.

The premier program of The HopeWorks Connection (a not-for-profit organization), TC3 has performed on television, at corporate events as well as at sold-out performances and on international tours. They have also released an award-winning album. However, TC3’s proudest fact is that young people who stay with TC3 complete high school and an impressive 90% continue on to higher education.

Gavin Hope is a natural-born performer with a truly exceptional, emotional voice whose diverse career includes song, stage, TV and film. This Juno-nominated solo recording artist has performed around the world sharing the stage with such greats as Aretha Franklin, Natalie Cole and James Brown.

His theatre highlights include lead roles in the original Canadian companies of RENT, The Lion King (Mirvish), The Tempest (CanStage) and As You Like It (CanStage). Gavin is also known for his work performing as a member of the Canadian a cappella vocal group The Nylons, with whom he has toured the world and recorded six studio albums (two of which were nominated for Juno Awards).

Arlene Duncan is a Canadian singer, songwriter and award-winning actress who has worked extensively in theatre, television, radio and film, but is perhaps best known for her role as Fatima Dinssa on the hit CBC series “Little Mosque on the Prairie”. She was also recognized as Female Vocalist of the Year at the Canadian Black Music Awards and received an African Canadian Achievement Excellence in Arts award.

Duncan‘s theatre credits include the Dora Award-winning production of Ain‘t Misbehavin, and the Tony award-winning musical ―Caroline or Change. The multitalented Duncan has appeared in many commercials and sang jingles for McDonald‘s and Pepsi.

Alexandra Oliver is a Burlington-based poet, who will read a poem she has written specifically for our BNMO “Gospel Groove” event.

Alexandra won the Pat Lowther Award in 2014 for her collection Meeting the Tormentors in Safeway. A graduate of the University of Toronto and the Stonecoast MFA Program in Creative Writing, Oliver began as a Vancouver-based slam poet in the early 1990s and appeared in the 1998 documentary film SlamNation. Her first published collection of poetry, Where the English Housewife Shines, was released in 2007. Meeting the Tormentors followed in 2013.

BNMO is a Not for Profit and is a Registered Canadian Charity.